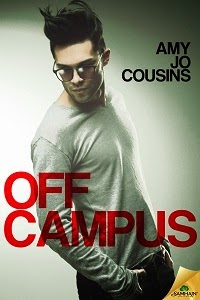 In this exclusive holiday excerpt, Tom arrives at Reese’s family home on Christmas Eve, still hiding from his boyfriend just how tough things are for him. He’s going to get a warmer welcome than he ever anticipated.

Everyone’s got secrets. Some are just harder to hide.


With his father’s ponzi scheme assets frozen, Tom Worthington believes finishing college is impossible unless he can pay his own way. After months sleeping in his car and gypsy-cabbing for cash, he’s ready to do just that.

But his new, older-student housing comes with an unapologetically gay roommate. Tom doesn’t ask why Reese Anders has been separated from the rest of the student population. He’s just happy to be sleeping in a bed.

Reese isn’t about to share his brutal story with his gruff new roommate. You’ve seen one homophobic jock, you’ve seen ’em all. He plans to drag every twink on campus into his bed until Tom moves out. But soon it becomes clear Tom isn’t budging.

Tom isn’t going to let some late-night sex noise scare him off, especially when it’s turning him on. But he doesn’t want any drama either. He’ll keep his hands, if not his eyes, to himself. Boundaries have a way of blurring when you start sharing truths, though. And if Tom and Reese cross too many lines, they may need to find out just how far they can bend…before they break.


Warning: This book contains cranky roommates who vacillate between lashing out and licking, some male/male voyeurism, emotional baggage that neither guy wants to unpack, and the definitive proof that sound carries in college housing.

(Tom and Reese on Christmas morning!)

He’d shown up before midnight on Christmas Eve, parking on the street outside the Anders’ house and sending Reese a text message to come and wake him in the morning. He felt awkward waking up Reese’s dad in the middle of the night and knew from experience that it wasn’t cold enough yet to make sleeping in his car unsafe. But it hadn’t been sixty seconds later that Reese was banging on his window, his smile fierce in the cold as he hopped with bare feet on the frozen ground. Tom had already fallen asleep, exhausted after three days straight of driving.


“Tom! What the hell? Get inside, you lunatic.”


He’d stopped first to wrap his arms around Reese’s slender torso, burying his face in his neck and holding on tight for what felt like ages, until he jerked back in alarm. Shit. He’d practically been smothering Reese.


“Sorry,” was all he got out before Reese tugged him back in close and wrapped his hands around Tom’s waist.


“S’okay. Really.” Reese pressed his forehead against Tom’s sternum before pulling back to look up at him and smile. “It’s okay.”


Tom kept his arms around Reese loose and easy. Holding him but easing up on the death grip.


Inside, he’d insisted on sleeping on the couch in the living room, since there wasn’t a guest room. Only the master bedroom and Reese’s old room, which Reese swore his dad would be fine with Tom sharing. Tom refused.


Reese had narrowed his eyes at that and handed him a pile of bedding. Tom, who couldn’t have said if it was manners or another public declaration of gayness that he ducked out of fear, kissed him goodnight at the bottom of a darkened staircase and stumbled his way through the living room to collapse on the couch. He punched up the pillow under his head, wrapped the scratchy homemade afghan Reese had given him around his shoulders, and decided he’d figure it out when he could think straight.


In the morning, Reese knocked him flat again with the laptop.


“It’s not a gift! I know we said we weren’t doing that.” Words spilled out of Reese as Tom sat there, in his boxers with a blanket wrapped around his lap, for Christ’s sake. The sunrise had barely started graying the sky outside the big plate glass window when Reese had snuck down the stairs and squeezed in next to him on the couch. They’d settled in to some serious making out, Tom rolling under Reese until his boy stretched out and covered the length of him, when Reese had jumped up and run over to the Christmas tree looming in the corner. He came bouncing back gleefully, laptop in hand, to a shell-shocked Tom. “I stuck a bow on it because, you know, festive. But it’s nothing. Just a loan, my old laptop from high school. And it’ll probably make you nuts because the S key gets stuck and you have to bang at it. But it’s better than my running coffee across campus to that horrible science building with all the fetuses in formaldehyde because, seriously? Those jars creep me out.”


Reese ran out of words, but Tom’s hadn’t come back to him yet. He stared at the scratched gray plastic and swallowed hard. Reese’s fingers crept over his.


He cleared his throat. Blinked several times. “No, I know.”


Reese scoffed politely and grabbed his face. He rubbed a thumb under Tom’s eye and then popped his thumb in his mouth. Tom knew he tasted salt.


“I’m not upset. This is a really nice loan.” Damn. He had to clear his throat again. “I feel kinda bad that I didn’t get you anything.” Trying hard, he dug deep for a wobbly smile. “Could have given you my old high school track shorts. They might even have fit you.”


“Yeah? You were a skinny ass punk back then?” Reese’s eyes were soft as he leaned forward and wrapped a hand around Tom’s neck, pulling him in for a kiss. “Like me?”


“You’re not skinny. You’re…slim. Strong.” He sighed and set the laptop on the floor next to the couch, sinking back on the deep cushions and tangling his fingers with Reese. Maybe Reese would lie down too so Tom wouldn’t have to look in his eyes for this part. He got his wish when Reese scooched down and stretched out next to him, head on Tom’s chest.


Tom kept one hand curled behind his head and played with the waistband of Reese’s sweatpants with the other.


“So how much have you figured out then?”

BIO
Amy Jo Cousins writes contemporary romance and erotica about smart people finding their own best kind of smexy. She lives in Chicago with her son, where she tweets too much, sometimes runs really far, and waits for the Cubs to win the World Series.
AMY JO’S SOCIAL MEDIA
Website / Facebook / Twitter / Pinterest
Posted by Angie Sandro at 3:00 AM