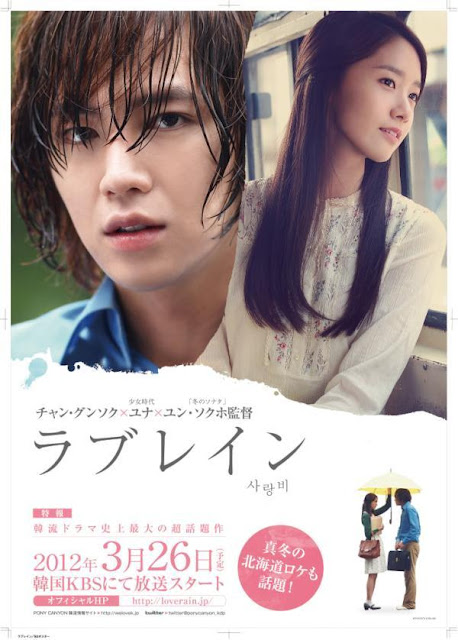 Kiwi and I finished watching “You Are Beautiful.” We totally loved it, especially Jang Keun Suk. So we decided to find another show with him in it. It came down between “Mary Stay Out All Night”, and our choice, “Love Rain” because Kiwi loves Im Yoona from Girls' Generation.


LOVE RAIN (Sarangbi or Love Rides The Rain) is a S. Korean drama which began airing on the Korean network KBS2 on March 26, 2012 to May 29, 2012. The first 8 episodes can be found on HULU. But if you’re in love with this series as much as I am, you’ll want more. Here is where I plug the awesome Viki.com, a ‘fan subbing’ collaboration hub. They take wonderful shows from around the world and add subtitles for us to enjoy in our language of choice.

Did you hear that fans? No need to wait any longer.

Okay, here is a little more about this show. 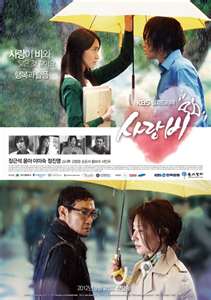 "Love Rain" begins in the 1970's and follows the ill-fated love of a popular and musically gifted art major, In-ha (Jang Keun Suk) falls in love in 3 seconds when he sees the beautiful, Yoon-Hee (Im Yoona). The first four episodes with these characters are beautiful and poignant. I cried about a gazillion times when they parted ways, for reasons I won’t divulge, but were tragic and heartbreaking.

﻿﻿Unfortunately, Kiwi wasn’t able to hang on through the melodrama of this ill-fated couple’s separation. She wanted the comedy, and right now, boys are kind of stupid in her point-of-view. Yeah, 7th grade boys—totally understandable.

Despite only being a little kid and not have any memories of the 70’s other than the hideous the bellbottoms my mom made me wear, I grew nostalgic over the fairytale of first love set in this era. Plus, the clothes were cool.
﻿﻿
﻿﻿
Flash forward to the present 21st century Korea, Seo In Ha's son, Seo Joon (also played by Jang Keun Suk), an arrogant photographer who’s nickname is “3 Seconds” because that’s all it takes for him to make a woman fall in love with him. Then he meets the daughter of Kim Yoon Hee, Jung Ha Na (Im Yoona), a cheerful and energetic girl who is not charmed by him at all.  Despite their bickering and disagreeing, fate continues to throw them together.

They totally brought in the funny with these last four episodes. I love how the actors portray distinctly different characters in the modern version. They do a wonderful job. I eagerly await the next episodes.