It's a #NewAdultChristmas!
Thanks for joining us as we celebrate the holidays with thirteen New Adult authors.
Check out every stop leading up to December 24 to get excerpts, exclusive content, and hopefully a cutie under the mistletoe! Follow along with the #NAChristmas hashtag, and be sure to enter the Rafflecopter below to win a grand prize pack of an ebook from every author!
Today's excerpt comes from AJ Pine, author of IF ONLY and the companion novel, WHAT IF (connected novels that do work as stand-alones), which just released on December 8th!


Sometimes it takes letting go of the past to find out who you want to be. 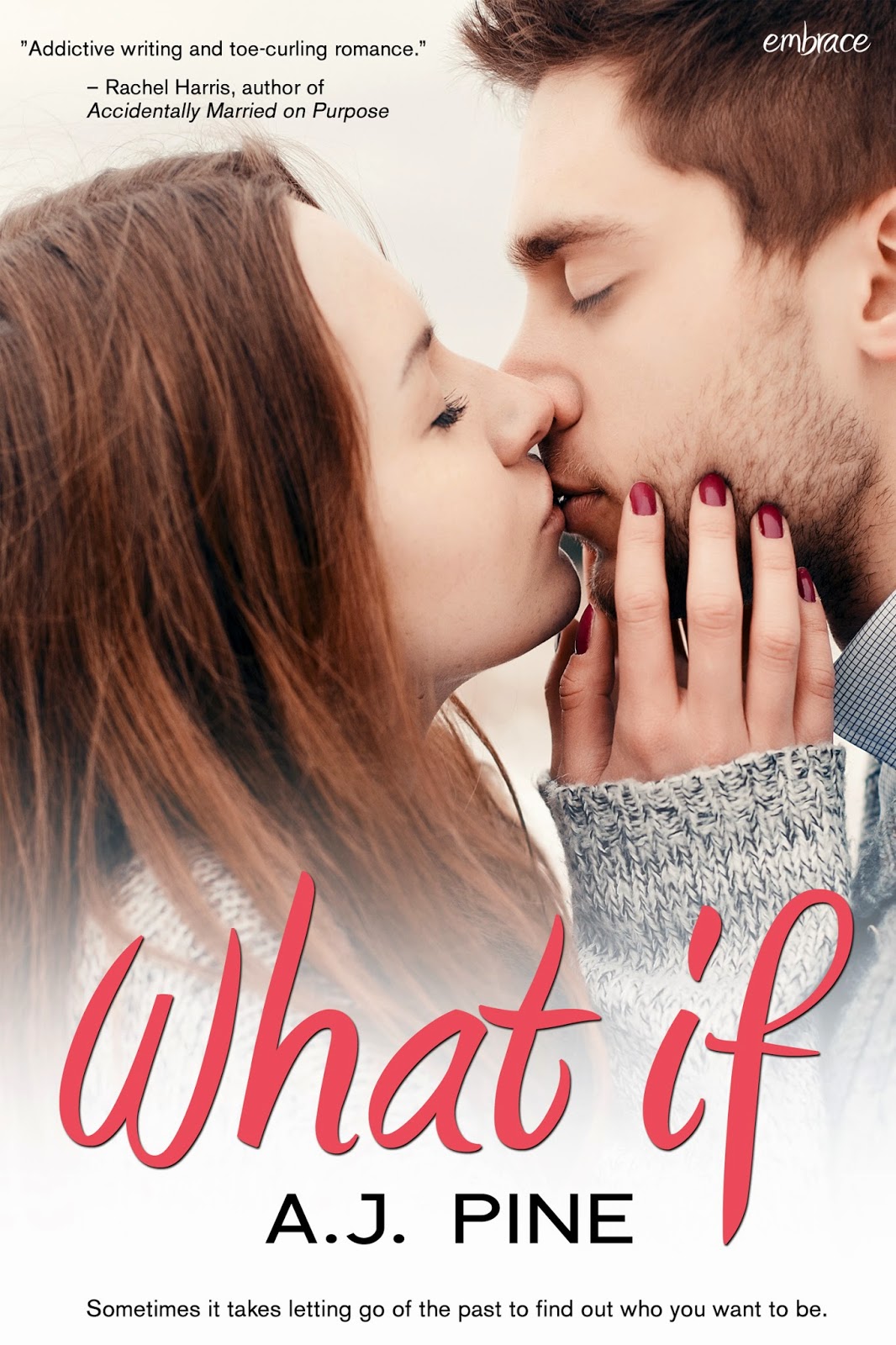 During his semester abroad, Griffin Reed almost gave his heart to a girl who loved someone else. Lesson learned. Now he’s home, where following in his father’s footsteps may not be what he wants, but it’s what his parents expect. It might be taking the easy road, but he doesn’t see a way out.


Something that could have killed Maggie Kendall took away the person she used to be instead. Her condition makes her dependent on sticky notes, photos, and medication just to get through each day. The last thing she needs is a distraction—or someone new to disappoint.

What they refuse to see is they are perfect for each other. Maggie makes Griffin want to be a better man, and he makes her believe a future is possible. But these two have to find a way to share the secrets ripping them apart, if they’re ever going to have a chance at happiness.


Today's holiday excerpt comes from WHAT IF.

***
We’re late. And I don’t give a shit. My hands cup Maggie’s cheeks, and I tilt my head down, forehead resting on hers.

“What if?” I ask her, and she doesn’t respond with anything more than the warmth of her breath mingling with mine, the air between us the only source of heat on a Chicago winter night.

“What if?” I ask it again, quieter this time, because maybe the question is only for me. Maybe this step is mine to take whether she’s with me or not, because either way the risk is huge, but I don’t want to walk into that building pretending. I don’t want to face the person who didn’t see me as a real option without proving to her—no, to myself—that I can be real. That I can want something more than my own self-preservation.

She doesn’t finish because my lips are on hers, soft and questioning at first, until she answers by letting her mouth fall open, inviting me inside. And the hunger returns, not only for lips touching lips or the surrounding air warming with our exhalations. It’s the hunger for more. More with this girl who hitched a ride with a stranger and still hasn’t run for her life. That has to be something.

We break apart, but only because of the whistling and clapping from some of the Michigan Avenue passersby.

“Oops,” Maggie says through a giggle. “Guess we have an audience.”

“Guess so,” I say, pressing a gentle kiss to her puppy-dog cold nose. I’m not ready for my lips to not be touching her skin.

“Maybe that’s our cue to leave?”

I want to kiss her all over again for making her words a question rather than a statement, which can only mean she doesn’t want to stop, either.

“Maybe.” Her hand slips into mine, and she tugs me forward. Or maybe I lead her. Either way, we’re moving again, the Hancock right in front of us.

“Quite the tourist location, huh?” I ask.

“It’s beautiful,” she says, eying the skyscraper from head to toe, her gaze landing on the massive Christmas tree that stands outside the building’s exposed lower level.

Her hand still in mine, I lead her down the steps to the base of the tree where tourists amass taking pictures with one of the city’s most popular holiday decorations.

“Do you have your camera?”

She takes it out of her bag, brandishing it as her answer. I pull her closer to the tree and tap a tourist on the shoulder, a man taking a picture of what must be his wife and kids in front of the tree.

“Would you take one of us, and I’ll get one of you with your family?”

He thanks me and hands me his camera. After getting a couple good shots of him and his family, we trade cameras so he has Maggie’s, and Maggie and I position ourselves in front of the tree.

“So…uh, this is awkward, huh?” she asks, and I understand. She’s taken a few photos of me, but we’ve never been in one together.

“How about if we just smile?” I suggest.

She nods, but it’s her next action that gets me. Standing on my side, she wraps both arms around my midsection, leaning her head on my chest. I wonder if she feels my heart hammering against her, an admission I’m still scared shitless to make.

My head dips to kiss the top of hers before posing for the camera, and tourist dad yells, “That’s a great shot! How about one more?”

Maggie’s shoulders shake with quiet laughter, and it’s contagious. Whatever our photographer captures now, it’s anything but posed.

“Thank you,” I tell him when he hands Maggie’s camera back to me, his wife and two boys standing next to him.

“You’re a beautiful couple,” she says, and then looks at her husband with a grin. “Remember when we were in love like that?”

They both laugh and head back up the stairs. Maggie’s hand sits in mine, but for a long moment we avoid eye contact, letting the woman’s comment fade along with the flush of heat in my cheeks I know will give me away.
***
That's it, folks! If you want to find out if Griffin and Maggie get their happily every after, WHAT IF is only $.99 at all e-book retailers.
Amazon     BN     iTunes     Kobo     ARe
About the AuthorAJ Pine writes stories to break readers’ hearts, but don’t worry—she’ll mend them with a happily ever after. As an English teacher and

a librarian, AJ has always surrounded herself with books. All her favorites have one big commonality–romance. Naturally, her books have the same. When she’s not writing, she’s of course reading. Then there’s online shopping (everything from groceries to shoes) and, of course, a tiny bit of TV where she nourishes her undying love of vampires, from Eric Northman to the Salvatore brothers. And in the midst of all of this, you’ll also find her hanging with her family in the Chicago burbs.
AJ’s debut NA novel, IF ONLY, is out now with Entangled’s Embrace line, and WHAT IF just released on December 8! Watch for a new NA series, ONE NIGHT and ONE LIFE, with Penguin/Intermix in 2015.

Email ThisBlogThis!Share to TwitterShare to FacebookShare to Pinterest
Labels: AJ PINE, IF ONLY, New Adult Christmas, WHAT IF