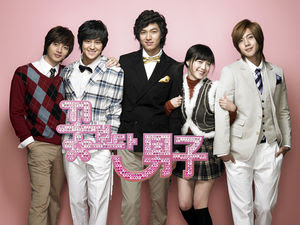 This week I took advantage of my 10 hour day work week. Since I have Wednesdays off, I used a vacation day on Tuesday. This gave me five days to lounge. Since my kids were also out of school, we’ve had some nice bonding time. I introduced Kiwi to Princess Hours after begging and pleading with her to watch it with me. It was the Vampire Diaries all over again. She loved it. Maybe in the future, she’ll stop arguing with me when I make show recommendations.

We’re now watching Kgotboda Namja BOYS BEFORE FLOWERS. We’re four episodes into this series and it’s hilarious. Four mega rich boys terrorize the students at the elite, Shin Hwa High School, through bullying. If a student gets on their bad side, a red F4 card shows up in their locker, and the entire student body attacks them.

The first scene shows a boy being beaten up and chased through the school. He ends up on the roof threatening to jump. That’s when our lovely heroine, Geum Jan Di, swoops in on her bike to save the day. She’s on campus delivering laundry, sees what is going on, and saves the boys life. As a reward/punishment, she’s given a scholarship to attend the school and begins to systematically take down the F4’s with wit, charm, and a mighty roundhouse kick to the face. 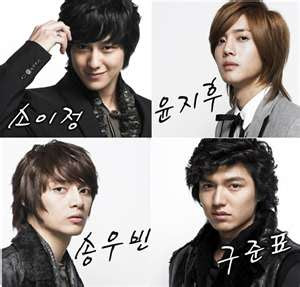 This first scene is pretty intense. The ruthlessness of the students and the terror of the boy being abused was no joke. It truly showed the horror of bullying. It provided the perfect opportunity for me to talk to my daughter about speaking out if she's ever the victim of bullying. But, it also showed how one person can make a difference. When Jan Di stands up to the F4's, wow. My daughter's face lit up. I hope that this is something that she'll take with her in her daily life. That she will stand up against injustice and not moo with the herd.

Anyway, as a parent, it is wonderful to find shows where I don't have to yell, "Cover your eyes," every few minutes because of graphic content. There is a sweet, innocence to the characters. Even the boys. There were quite a few moments when we laughed so hard the boys wandered into the room to find out why. I can't wait to see how this series to end. I, of course, am hoping the bad guy transforms into a gem and gets the girl in the end.