THE KING OF DRAMAS

This television series began airing in November 2012, on Mondays and Tuesdays on SBS. Also available on Dramafever, HULU, and Viki.com with subtitles. 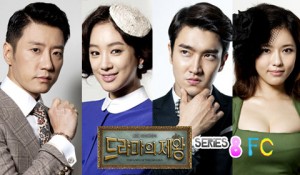 So, you know how much I love South Korean dramas, well, I found the one which now ranks as my favorite.


Why? Well, let’s start with an awesome lead actor, Kim Myung-min who plays Anthony Kim, a shrewd, commanding, businessman who turns every drama he touches into a #1 rated series. Anthony’s all about the dollars and he won’t let anything or anyone stand in his way. When a tragic accident takes the life of one of his employees, he is cast down from his throne. Unfortunately, he destroys the career of an idealistic, rookie writer, Lee Go-eun, played by Jung Ryeo-won, in the process.


Fast forward a few years … we find Anthony struggling to survive. He wants to regain the pride he lost. To prove he is the King of Dramas to those who cast him. To do so, he must gain the help of the writer he burned, Lee Go-eun, by convincing her to trust him with her screenplay Kyungsung Morning.


It's an unholy alliance. The angel and the devil join forces. What results is a hilarious dramedy that leaves me breathless on the edge of my seat every freaking episode. Like Monday nights episode, oh, my gosh, I almost died. Died! The writers have the ability raise the conflict level to nerve-wracking heights. And as soon as one critical situation is resolved, they bring in another.