MY GIRLFRIEND IS A GUMIHO (NINE-TAILED FOX) 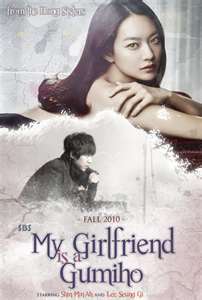 My Girlfriend is a Gumiho is a South Korean romantic comedy series that broadcasted in 2010. It can be found on Hulu and Netflix. I suggest watching on Netflix to avoid commercials. 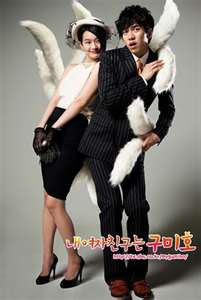 
A gumiho, legendary fox with nine tails, is trapped inside a painting of Grandma Samshin for 500 years after false rumors are spread claiming she eats the livers of humans making her unable to find a husband so she can become human being.

Cha Dae-Woong (Lee Seung Gi), a spoiled brat of a man-child, accidently releases the gumiho. Terrified, he takes a life-threatening fall and the gumiho saves his life. After he wakes up, he meets a pretty girl, not knowing she’s the gumiho he released. Because the gumiho saved his life he has no choice but to let the gumiho stay with him. 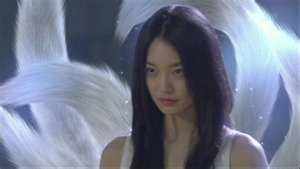 The actress, Shin Min Ah, who plays Mi ho is “pinch her cheeks” adorable until her foxy side comes out, and then she can be downright terrifying.

This is a very cute show. Kiwi and I watched it after watching Playful Kiss, so of course there were comparisons in my mind. Some of the episodes dragged for me. However, Kiwi loved they mystery and magic of this fairytale, and she wouldn’t let me abandon it. I'm glad I hung in despite the slow parts, because I was balling my eyes out like a wee little babe at the surprise ending.
Posted by Angie Sandro at 8:01 AM