A couple of months ago the kids and I went huntin’. Yep, that’s right. We took our nets down to the local park, in the middle of our town, and found a pond. The water reached our ankles, smelled like rotten eggs, and the surface crawled with bugs. Little black dots swam along the edges—thousands of baby tadpoles.


I wasn’t sure what type of frogs or toads they’d become. But it didn’t really matter to the kids. They scooped their hands in the water (ugh, so nasty) and I ended up helping (even worse) and caught about eight tadpoles. We had a fish bowl at home and I, in my infinite wisdom (not), decided to let the kids learn about the life cycle of the frog.

My daughter went online to research how to take care of the slimy, little critters. Youtube has lots of videos, and she learned what type of tadpoles we found and how to feed them. It turn out that toad tadpoles are black and shiny; a brown and slightly bigger tadpole that we thought might be a frog. The ginormous one the length of my pinky turned out to be a bullfrog tadpole, and it seemed sickly. It hadn't even tried to swim away when I scooped it up in the net.

The next day, I came home from work and my daughter met me at the door with a smile.
"So," I said. "How are the tadpoles?"
"They're all alive. Even the sick one."
"Oh good." I smiled.
She nodded her head, grabbed my hand, and dragged me to her room. "See, all the other tadpoles are taking care of it. They keep cleaning it."
My stomach twisted. "Uh, no, baby. They're not cleaning it. They're...eating it. The tail half-chewed off."
Her eyes widened. "Oh. My. Gosh," she cried. "Mom, why didn't you tell me tadpoles are cannibals!"

The funeral was nice. We wished it well as we flushed what was left of it in the toilet, and consoled ourselves that the tadpole had been dying. We now knew the warning signs and wouldn't make the same mistake in the future. We'd learned our lesson.

The next biggest tadpole turned into a toad within a couple of weeks. Cute little thing. We put him in a separate fishbowl with lots of dirt, ivy vines, and fed him aphids. Which I ended up being the one responsible for catching since my son and daughter declared they were afraid of bugs (I'm a push-over). The other tadpoles were getting bigger, but not at the same rapid rate. They didn't even have legs yet.

The baby frog— I know, I said toad. I was so very wrong. Let me clarify—the baby tree frog grew rapidly with a steady diet of bugs. Then one day, I looked in the bowl and he was missing. Yikes! It happened the week my daughter went to camp so I had to break the news that her frog was on the loose somewhere in her bedroom. I think he fell back behind the dresser, which is too big for me to move.

Darn his little suckered feet. I'm hoping he's still alive, and we're just not seeing him because he's nocturnal, but I'm not holding out much hope.

I decided to take the rest of the tadpoles back to the pond so the kids could say goodbye and release them. They were getting too big for the bowl, and I worried they wouldn’t be getting enough oxygen, which turned out to be the cause of the Day of Mass Death a few days later. Unfortunately, the ‘pond’ had dried up, so, I guess I should call it a super, large puddle. All the tadpoles that had been in this body of water were dead. At the time, the kids and I consoled ourselves that we’d saved lives.

Sigh, the relief was short-lived.

About a week later, I woke up one morning to find all but one of the tadpoles dead. It had happened in the night. The water must have gone bad. The lone survivor had wriggled on top of a rock where it was half out of the water. He is the ultimate survivor and I love him so much.

He’s now my cute, little toad. And when I say mine, I mean MINE!

He may be in the kid’s room, but every night after the sun sets, I catch the bugs drawn to the front porch light or pluck aphids off my neighbors rosebushes (yeah, they think I’m a little odd now, shrug). Then I watch over my little Theo until he eats. He’s getting a little chunky and bumpy, but that’s okay. I think he's adorable. Look closely, at the middle of the picture. He's about the size of a penny in real life. 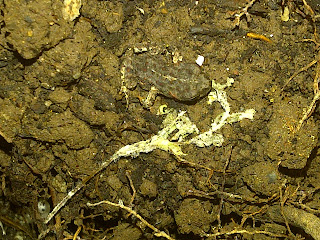 Oh, and don't worry, he's not dead. I touched him and he jumped off away from me.