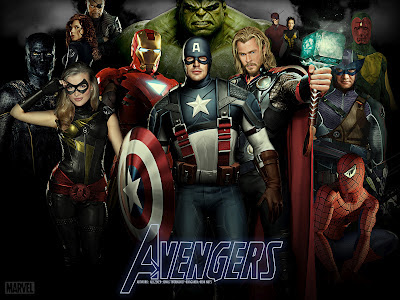 In preparation for our Avengers extravaganza, the Sandro clan had a Marvel marthon over the weekend. We missed CAPTAIN when it was in the theaters, and it had been a while since we saw THOR.

CAPTAIN didn’t do much for me. I expected it to be better. I mean the IRON MAN movies, THOR, even the HULK, I found more enjoyable. This was partly my fault for having such high expectations. My husband thought it was going to be worse, so he enjoyed the non-stop action and minimal character development. I kept comparing it to RAIDERS OF THE LOST ARK, and it lost. Still there were some LOL moments.

What can I say about THOR—rock hard abs. Hotness. Beautiful CGI. And LOKI!

Thank goodness we watched these movies before watching AVENGERS or we would've been lost because the movie doesn’t explain the back-story. The back-story is the previous movies leading up to the AVENGERS.

From the first scene until the last, it did not disappoint. Josh Whedon is my hero. The characters were developed, and I loved the comic relief. The banter between Iron Man and Captain reminded me of the Scooby Gang. But, my favorite character was the Hulk (although, Loki runs a close second). He brought the funny.

Oh, for those of you haven’t watched this yet, don’t forget to stay during the credits. There are two extra scenes. We only saw the first one which previews the big bad for the next movie. I found out later from my friend that there is another scene at the very end. That’s right, two scenes. I feel like a bad fan for leaving too early.

So, who is your favorite character? Do you plan to see it again?