I’ve been fighting the flu this week, and I spent my sick day off watching a fantastic British television series called MISFITS, by creator and writer, Howard Overman.

Yeah, that’s right. Fourteen hours curled up in bed, watching a science fiction comedy-drama about a group of teenage juvenile delinquents who while doing community service get caught in an electrical storm and get SUPER POWERS. 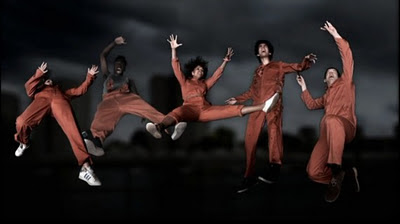 After the first episode, I was hooked. The characters are uniquely flawed, sharp, witty and, okay, a little creepy. The characters powers are a reflection of their worst fears and insecurities--only majorly twisted. As the season progress, the characters evolve. What at first are flaws become their strengths. By the end of season two, I'd fallen in love with them.

I'll be honest, this show has bumped Buffy the Vampire Slayer out of it's long running position as my favorite comedy series. The lines are quick and witty. I laughed so hard I forgot I was sick. But this show is for mature audiences only (think Game of Thrones). No kiddies should be in the room when you're watching.

Season One and Two can be found on HULU,  The third season reportedly starts on October 30, 2011 on E4. I don't know if I get this station, but I plan to find out.

For a more indepth review, check out this review on Bleeding Cool.
Posted by Angie Sandro at 9:00 AM